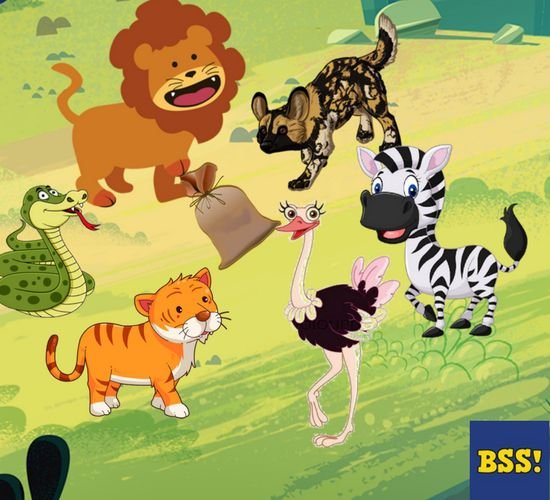 This is an amazing animal story with moral for kids. Once upon a time, long ago, in a forest all the animals were hungry and thirsty. You see, that year the rain had failed to come and therefore, the forest was on the brink of facing a drought. The sun shone brightly every day, and all the remaining water was fast depleting.

Many animals of the forest had already died. “Let’s be friends,” a lion says to some other animals, who were among the only few who survived now. So, a lion, a tiger, an ostrich, a zebra, a snake and a hyena became friends. Each of them swore to help each other out.  “No matter how hungry we get, we won’t eat you”, promised the carnivorous animals. So, they walked and walked in search of some food and water. There weren’t many animals left. Also, read The Foolish Rabbit.

animal story with moral
Finally, after many hours of hard laborious walking, the group of animals came to a waterhole. “Does this have any water?” asked one of the animals. “I am extremely thirsty, it sure would be nice if we found some water now,” cried the zebra. All of them were at their limits.

“Let’s hurry,” said the snake, encouraging the others to keep moving. Just then the lion found something. “Everyone look, I found something!” yelled the lion in excitement. At once, all the other animals rushed to the lion’s side, wondering if it was something they could eat.
“Wonder what it is?” questioned the hyena. “Can we eat it?” asked the tiger. What the group of animals saw was a bag, it seemed to be full of something. “Hey ostrich,” called the lion, “why don’t you peck a hole in it with your beak? Then we will know what this bag has in it.” You may also like to read, The Crab And The Monkey.
The ostrich agreed and smoothly pecked a big hole in the bag. A white powdery substance oozed out of the bag. “What is this?” asked the snake. “Salt” one of them informed the others. “Let’s eat it, for who knows when we will be able to find something edible in future!” agreed the lion.
So, all the animals decided to take turns, but hunger made foolish things out of the animals. And soon, all of them began to fight. While all this was happening, fox happened to be passing by. When he saw the animals and the bag of salt, he had a cunning idea. “My dear friends,” he called out to them. “There is no point in fighting, I shall help you all out”. All the other animals stopped and listened to the fox talk.
“All of you, close your eyes. While your eyes are closed I’ll change the place of the bag. So, whichever one of you finds the bag of salt, shall have the first turn”. All the animals thought that the fox’s idea would help them out, so they stopped quarreling and closed their eyes. With their eyes closed, they searched for the bag of salt. But they couldn’t find it.
After a long time, the hyena, who got tired of looking for the bag of salt, opened his eyes. “What?!” he screamed and startled the others. When all of them opened their eyes, they realized that the fox had run away with the bag of salt, and they had been fooled! Also, read A Bird In Hand.
MORAL OF ANIMAL STORY WITH MORAL: IF WE MIGHT AMONGST OURSELVES, A THIRD PERSON WILL RUN AWAY WITH OUR GAINS!