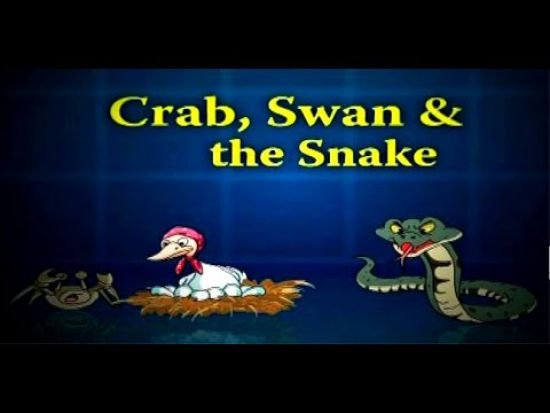 This is the great story of birds and animals for children. Long ago, a crab lived in a lake near a forest. Crab’s best friend was a swan which was living near the lake, too. They were living happily in their places. Also, read The Young Crab And His Mother.

One day, a snake came to live near the lake. “My dear friend, since the arrival of the snake, my bad time has started. It is eating all my eggs! I cannot fight the snake. Please, help me! Find out a plan by which we get out with the snake,” said the scared swan. There was also a mongoose living nearby. “Dear friend, I have an idea! We will get some fish from the lake and throw them one by one from the snake’s house to the mongoose’s house,” suggested the crab.

story of birds and animals Image Source @www.youtube.com
Crab and swan caught some fish from the pond and scattered them from the snake’s house to the mongoose’s house. Then, they watched the movements of the mangoose from their respective houses. “Hi, smelly fish!v Hmmm… Fish in front of my house!” the mongoose said licking his lips.

The next moment, mongoose started eating fish. Following the trail of fish, he reached the house of snake. “My enemy is here! I must kill it,” the mongoose said to himself. A big fight broke out between the snake and the mongoose. The snake was killed. Now, the swan and the crab were happy.
The next day, mongoose came there for more snakes. But, instead of snakes, he saw the swan egg. “Hmm… There are some swan eggs. I like them very much. Now, I will come daily here for the eggs,” said the mongoose. The swan and the crab became helpless. By their foolish action, they had invited a new enemy which was more dangerous than the previous one. You may also like to read, The Swan And The Owl.
They were left with no option but to shift from their homes. They always remembered the lesson that mangoose had taught them.
MORAL OF THE STORY: THOUGHTLESS ACTIONS LEAD TO DISASTER.
Here is a short visual depiction of the best story of birds and animals “Crab, Swan And The Snake“. See the story video below:
Story Of Birds And Animals Video