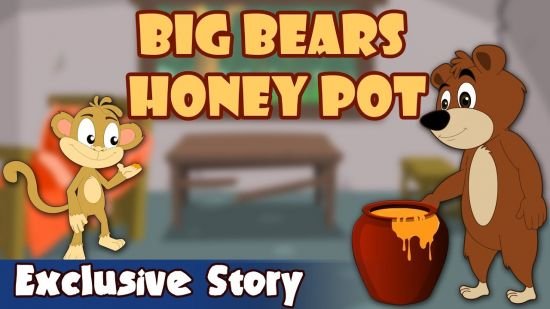 This is one of the best children’s short stories about bears to read. Once in a jungle, a big bear and a naughty monkey were great friends. They used to have a lot of fun together. However, the monkey always used to copy the bear. He wanted to become just like his friend.

One day, when they were sitting together, the monkey again started to copy him. On seeing this, the bear asked, “My dear friend monkey, why are you copying me?” “You are so big and strong, bear. I want to become just like you,” the monkey replied. “You are so spry and active. Don’t think about what I am, you are awesome too.” the bear told his friend. You may also like to read, The Two Voracious Bears.

children’s short stories about bears Image Source @www.youtube.com
Suddenly, the bear spotted a big pot of honey near the mango tree. The bear ran at once and grabbed the fresh pot of honey. “Ummm… I am going to have great fun with it,” he said licking his hand. “Bear, can I have some of it?” asked the monkey. The bear gave the monkey a small gulp of honey. The monkey loved the taste of it. But monkey was disappointed with his friend because he had given him a very small gulp of honey.

The bear told him that this much was enough for the monkey. Soon, the bear picked up the pot and hid it in his den before someone else could steal it.
“Bear never gives me honey. I think that is the secret of his strength. But this time, I’ll not let him keep his secret,” the monkey thought to himself. He quietly entered the bear’s den and stole the pot of honey. Also, read The Foolish Bear.
The next day, Bear went in search of his friend. The bear went to monkey’s house to check if the monkey was doing well. The monkey was suffering from acute stomach ache. When the bear saw the empty pot of honey, he understood what exactly had happened. The monkey was crying out of pain and said, “I just wanted to be like you!” To this, the bear said, “You can’t be me by simply copying me! Only we bear can digest so much of honey. That’s why I gave you a little bit.”
Immediately, the bear called the doctor to comfort his friend. Since then, the monkey never tried to copy anyone. He had learned his lesson. Also, read The Bear And The Crabs.
MORAL OF THE STORY: COPYING OTHERS BLINDLY CAN BE VERY HARMFUL.
Here is a short visual depiction of one of the children’s short stories about bears “Big Bear’s Honey Pot”. See the video story below,
Children’s Short Stories About Bears Video