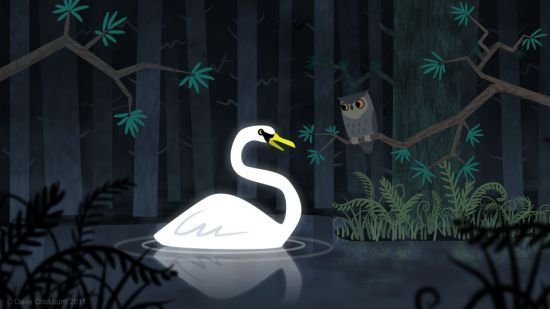 This is one of the best animal stories with moral for kids. Long, long ago, there lived a swan in the lake. The lake was near the beautiful forest. One night while the swan was gliding in the lake, an owl saw her. The owl was wonderstruck after seeing the swan gliding in the moonlight. He complimented the swan for her wondrous skills and the two became the best of friends. Also, read A Wise Old Owl Story.

They used to meet every night and shared the daily routine activities with each other. Soon, the day came when the owl had to go back to the forest. The owl said to her, “I am going back today to the forest. You are welcome to visit me anytime.” After saying this, the owl said goodbye to her dear friend and flew away.

animal stories with moral
Image Source–> www.kuttees.in. Some days later, the Swan decided to visit the owl and went off to the forest. It was daylight when she reached to the forest. She searched for the owl here and there but could not find him as he was hiding in the dark hole of the tree. Not before long, she heard his friend saying, “Hey Swan, welcome to my home. Please make yourself comfortable till the sun sets. I can come out only at night.”

That night, the owl and the Swan had a great time talking to each other after a while. The owl made the special feasts for his friend and they celebrated their friendship that night.
The next morning, the owl and the Swan were sitting on the branch of the tree. At the same time, some people were passing through the forest. The owl started to hoot after hearing the noise. Those people believed that it was not a good sign to hear an owl hoot. So, one of them decided to hit the owl with an arrow. The owl flew away and hid inside the dark hole of the tree. Unfortunately, the swan could not move and she died. Also, read A Wise Parrot.
MORAL OF THE STORY: ONE SHOULD NEVER LEAVE FRIENDS IN THEIR DIFFICULT TIMES.