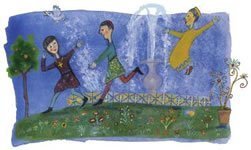 The citizens of Cordoba lived in the most beautiful city in the world and were very proud of the Great Mosque in the center of the city. Not only was it a wonderful mosque, but it was surrounded by magnificent gardens, full of fragrant orange trees, foamy fountains, and flowers of all colors. The inhabitants of Cordoba used to sit in the garden and think they were in Paradise.

In and out of the fountains; they jumped over the flowerbeds; they hid in the gardens and threw ripe oranges at anyone they saw.

The gardeners, Ibrahim and Yacoub, were trying to catch them, but the three friends were too quick for them.

One day the boys were throwing oranges at people as they left the mosque. A particularly rotten orange fell at the feet of a richly dressed man.

– We’re in trouble! Exclaimed Rashid. – It’s the caliph in person! – Let’s get away!

The three boys tried to escape, but the caliph’s soldiers caught them and brought them to his presence.

“Finally, they were caught by the caliph’s own soldiers!” Rejoiced gardener Ibrahim.

– Now that’s them! They’ll get at least ten lashes!

The caliph questioned them:

“With what, then, boys, throwing oranges at your caliph?”

“We didn’t know it was you, Lord,” Rashid muttered.

– Have you done this often? Asked the ruler sternly.

The boys looked at the floor sadly and nodded.

“Every day, know Your Magnificence,” exclaimed the gardeners. – These guys are our misfortune.

“Well,” said the caliph, trying not to smile, “I see that you will have to be severely punished.” I condemn you to work in these gardens every day for three months.

And the boys did that. For three months they planted, weeded, watered the flowers, and trimmed the garden shrubs. Yacoub and Ibrahim made us work without rest.

After work, the three friends, tired and hot, strolled through the cool mosque.

“I have never seen such a beautiful building,” Miguel whispered. – It’s much grander than our church.

“Or my synagogue,” Samuel added. “Beautiful and wonderful, no doubt.”

“Our mosque is truly the house of God,” Rashid rejoiced.

As they grew older, the three friends stopped seeing each other so often.

Samuel traveled everywhere as a merchant, dealing in spices and silk. He wrote down all his travel impressions in a diary and wrote poems of rare beauty.

Miguel inherited his father’s fifth. He became a great landowner and was known for his kindness and the cheerful songs he sang.

The caliph grew old and his enemies began to attack Cordoba from all sides. He was eventually defeated in a great battle by the Christian king Fernando.

Michael, who was now the most important man in Cordoba, went to greet the new king.

“Don Miguel,” said the king, “take me to the Great Mosque, of which I have heard much.”

“With pleasure, Lord,” Miguel answered. – It is a source of pride and joy for all Cordoba inhabitants, both Muslim and Jewish.

The king contemplated the mosque.

“It is indeed magnificent,” he agreed.

“But this is going to be a Christian city, and we’re going to build a big cathedral in this place.” The mosque must be toppled.

That same night Miguel invited Samuel and Rashid to dinner.

“My dear friends, I have terrible news.” The king plans to tear down our beloved mosque.

– And our wonderful gardens? Asked Samuel and Rashid.

– They will also be destroyed.

– What can we do? Rashid asked, his head in his hands.

“We have to talk to the king and tell him how precious the mosque is to everyone in Cordoba.”

The next day, the townspeople filled the square to see the king.

“I am here,” Miguel announced, “on behalf of all the Cordoba Christians, to ask the king to spare our mosque.”

“And I am here on behalf of all the Jews of Cordoba,” said Samuel.

– Is that so! Cheered the crowd.

“And I, sir, speak on behalf of all Muslim citizens.” Save our mosque!

Everyone clapped even harder.

“I see that the three communities are asking for the same, and I will have no allies if the mosque is toppled.

After thinking for a moment, the king announced:

“I will build a church in a small part of the mosque, but the rest of the building and gardens will belong to all the inhabitants of Cordoba.

The cheering of the crowd filled the square.

And so the Great Mosque was spared for future generations to admire and enjoy. It still remains intact today, and has millions of visitors a year. Many sit in their gardens and enjoy the shade and scent of the trees. Some even claim to have seen the ghosts of three roguish boys coming in and out of their sources. Ann Jungman The most magnificent mosque London, Frances Lincoln, 2006 (Translation and adaptation)