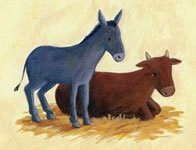 On the afternoon the star appeared in the sky, pointing the way to meet and worship the future King of the newborn world, Pastor Ahmed lay sick in his hut with a high fever and unable to move. He then decided to call his son Ali, saying to him:

– You will worship the Boy, following that star. You will be given a bag of dates.

There he became concerned.

– What if the path is too long? It’s just that I’m still small and not very strong, my father.

– Prepare the donkey Barai, he will take you.

But Barai was not very strong either, he had many years on the back, he was so thin he could see all the ribs under his skin, his hair was rough and thin, his eyes were cloudy. Even so, it was better than nothing…

There he rode the donkey and left.

Hours and hours of a slow journey passed before they came, late into the night, to a cabin on whose roof the star had stopped.

There he saw a newborn boy sleeping on the straw. A very sweet-faced man and woman slept beside him. Next to the boy was an ox and a donkey. There, understanding that it was best not to wake anyone, he dropped from Barai’s back, leaned against a wall of the cabin, and fell asleep.

Barai, for his part, was wide awake, because when one is old, one sleeps little. He was dead tired but awake. Suddenly he saw that the donkey next to the boy was opening his eyes.

“Eh,” he exclaimed softly. How are you? You were the target of a great honor, right?

“So it was,” answered the other. But you know, the force of being still and crouching hurts my paws and I’m all sore. I would give anything to move a little but I cannot leave my post, for my breath and the ox’s warm the Boy.

“Go around and I’ll replace you,” Barai proposed.

The donkey did not beg, but slowly rose and Barai took his place. Barai was very proud to be with the Child, to warm him as best he could, and despite his weariness and discomfort, he managed to stay awake.

But above that meager cabin high in the sky, the star continued to shine.

After a while the donkey returned.

– I feel much better already. Thank you, friend, you were very good to me.

The two switched places again, Barai cuddled next to Ali who slept and shortly after, he also fell asleep.

The boy woke up. They also woke up their parents, the ox and the donkey. There he also woke up, worshiped the boy, and offered him the bag of dates he had brought from home. There he went to wake Barai, who was still sleeping close to him, to make the return trip when he suddenly widened his eyes in astonishment.

Was it “your” little donkey who was getting up with a little bray?

Barai’s hair had changed and was now full and gleaming, his gaze was alive, his ribs no longer protruded, he seemed to have rejuvenated many years. Ali climbed into his croup, increasingly marveling, eager to tell his parents what had happened.

Meanwhile came other shepherds, peasants, local people, all bringing gifts to the boy, all eager to worship the King of the world.

The Boy said goodbye to Ali with his little hand and his father and mother smiled at him. And Ali, who still couldn’t understand much of what she was experiencing, such as the changes that occurred with her donkey, was very, very happy. Rossana Guarnieri Christian Living and Living Madrid, RIALP Editions, 2008