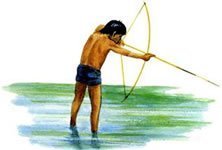 (a history of Papua New Guinea)

It has not been raining for many days. The water was clear, the river low. There could be no better time for fishing.

The boys from Kamberap prepared the javelins.

“It’s work in vain,” the men said. – You’re not gonna catch anything. Even the herons know that there are no fish in the Xilil River.

“But we want to go up to the mouth of the Troali,” said the boys.

“Even more useless work,” the men said. “But go there and try your luck.”

The boys went to sit in the shade of the hibiscus surrounding the village square. They were silent. Each one wondered whether or not it was worthwhile to carry out the planned fishery.

It was then that Bonifo came up with a big fish.

Yamandau was the first to see him.

The boys suddenly got up and ran to Bonifo, surrounded him, admired and felt the fish, wanted to know when, where and how Bonifo had caught him, and harassed him with questions.

Bonifo didn’t answer. She just laughed and held the fish in the air to keep it out of the boys’ reach. They took a step back. The circle around Bonifo widened and the confusion of voices fell silent. Only Yamandau insistently asked:

“Tell us there, Bonifo, where did you get it?”

“Where there are many like this,” said Bonifo, smiling happily and walking again.

Nothing stopped the boys now. They hurried home, brought the arrows, ran to Koere to ask him for baskets to catch fish, and then shook everyone into the river.

The rest of the day was spent at Yilil. Koere, who had come with them, also stayed and helped the boys to their best. He prepared the arrows, replaced the broken ends with new, hard tapioca tips, taught them how to shoot the arrows, and dived into the deepest parts of the river to personally check for fish or not.

There were fish… here and there, but they were so tiny that it was not worth pointing an arrow at them or wasting time putting baskets. The braiding was too imperfect, so the baskets would hold no fish. For Koere this was evident.

But for the boys not. They were confident and would not give up. Even if all means failed, there was always another possibility left: magic!

Even though the boys had never seen it, everyone knew that the old men in the tribe knew a way to bewitch the fish with formulas and magic songs. The dazzling liquid of the poisonous lianas made the fish tired and powerless, and it was even possible to catch them by hand.

– Why don’t we try? Asked Yamandau. “We’ve tried everything else, why not liana magic?”

“There aren’t the right lianas for that.” Only in the mountains, up there.

“Never mind,” said Yamandau. “We use lianas from here and we do our magic.”

“We don’t know the magic words,” he said.

“Never mind,” Yamandau insisted. – We made up the magic words.

Koere went to get lianas. He cut them into pieces, tied them together, and gave each boy a bundle of hard but malleable stems. The boys spread their beams on the bank stones, fumbled for hard fist-sized pebbles, and struck them on the stems until the lianas fell apart and the juice began to drip.

They proceeded exactly as the old men did with the authentic magic of the lianas, except they were neither the right lianas nor the right magic words.

Still, while Yamandau struck the beam of lianas, he remembered a song that would surely be as good as any other magic formula:

Yamandau sang with all his might as he hit the water, so full of anger and disappointment at the failure of that day on the river, that he even frothed and splattered all around him. His song echoed in the ravine, blending Yamandau’s voice with Koere’s and the other boys’ voice, and the echo coming from all sides. The beat of the lianas in the water marked the beat of the music, as do the drums in the village parties.

Before the sun went down, the boys went home. They were tired and hungry. The most they could catch that day was seven crabs.

They roasted them in a small fire by the river and ate them before they climbed the hill on their way to the village at night.

But they didn’t go home soon. First they passed Bonifo’s house to see if Bonifo had eaten the fish. Not yet! There he was, on a banana leaf, by the stove, roasted, auburn and toasted. The boys kept their eyes on the fish.

From the back of the porch Boniface exclaimed:

– At last! They left me waiting so long for you! Go up.

They climbed to the balcony. Bonifo went to them. He leaned over the fish, broke it, and gave each of them a piece of white-smelling flesh, plus a portion of tapioca puree.

– Glad this knows it! Said Yamandau. And after some time:

“Tell us, Bonifo, how did you catch the fish!” Was it with magic?

– Then? Exclaimed the boys.

The boys didn’t notice. Bonifo laughed and explained to them. He had traded the fish for two coconuts… at the Green River Market… Brigitte Peter Lene Mayer-Skumanz (org.) Hoffentlich bald Wien, Herder Verlag, 1986