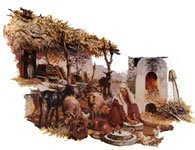 Sebastião is sitting on his father’s lap playing “How much do you like me?”

– Like this! – and the father holds tight to Sebastian.

– And us all together?

Sebastião screams with joy because his father squeezes him so tightly and then says:

“And Mom likes you as much as she does daily bread.”

– She said it. Or something like that. They like you because you are always present to us as the daily bread.

– It’s not bad either! – answers the father.

Sebastian thinks for a moment.

– Because you don’t eat cake every day. Bread, yes. We need bread to live – and Dad pats his forehead. – Bread! Didn’t we want to bake special bread to put in the Easter basket?

When his father was young, he lived on Hinteregg Farm. He has lived in the valley for a long time but the small farm with the apple trees and the old oven still belongs to him. Each time you need to bake bread, Sebastião and his parents go to Hinteregg.

Father, make a loaf like Jesus ate in his day.

– No. I liked something more substantial. On Sunday, I will ask Lena again, right after Mass.

The pastoral assistant has a cookbook from the time of Jesus.

“Your father is right,” he tells Sebastião. “During the Pesach holidays, the Jews ate nothing made of yeast dough. They made spice cakes with matzo flour and eggs. But for other feast days they had leavened breads. Look, here it is: raisin bread, sesame braid, fig bread, walnut bread and dates…

“I’ll copy the recipe to you,” says Lena. “Do you think your father could take the communion group?” Baking bread in Hinteregg would be a great group class!

Dad studies the recipe and sighs.

– With natural yeast? But it will take days!

“Never mind,” says Sebastião. – There is still time. Can I tell the boys that we are going to bake bread on Holy Thursday?

– It’s ok. I will then take away Holy Thursday. And now I will show you how to make natural yeast.

In a clay bowl mix, with a wooden spoon, whole flour with warm water. Then put the pasta outside on the sunny terrace.

– The mixture needs air to be able to ferment. In the air there are microorganisms so tiny that they can only be seen under the microscope. Yeasts penetrate the dough and modify it with their gases until it becomes sticky and blistered.

At night, Sebastião brings the tureen into the room for the mass to become hot. On the third day the first bubbles begin to appear. The pasta also has another smell.

– Is this getting good?

– Yeah. It smells like fermented. It is at this beginning of yeast that we now mix flour and water to make the final yeast.

On the morning of Holy Thursday, Sebastian was amazed. The yeast had doubled in size! Dad pours a piece into a cup he keeps in the fridge.

– It’s for the next time we bake bread. Now let’s make the dough for your walnut bread and dates. For this we will need the largest bowl there is at home!

The father mixes flour and warm water again, then honey and a small cup of olive oil, dates and finely chopped dried nuts. Knead hard and cover the dough with a kitchen cloth.

The mother shakes her head:

“Formerly baking bread was a women’s task, wasn’t it?” And very time consuming!

The mother fills a basket with the Hinteregg snack, because even the oven heats up and the baking takes hours. Sebastião and his father take the pasta container to the car. The children will be picked up at the bus stop and then up the mountain.

In Hinteregg’s old kitchen each child shapes his bread. They are then covered with cloths and placed in the sun. Now they have to “grow” for at least two hours. They have plenty of time to eat and play. But everyone wants to help light the oven.

The old oven is outdoors on the edge of the orchard. It has room for nine loaves. Sebastião’s father stacks the wood chips in a way he had learned as a child from his grandmother. Wait until the wood has burned down to embers. Children dip pine branches into a bucket of water. The father sweeps the embers aside and sweeps the ground with the damp branches. Now it’s so exciting!

Each child scratches the bread with a knife. Then the breads are baked. Dad puts them in with a long-handled shovel and closes the door.

It’s good to sit by the hot oven and feel the spring wind in your face. It is nice to imagine how Mary baked bread for her little Jesus and Joseph two thousand years ago. The dates had bought them from a salesman.

– Jericho merchandise of the first category! – the seller would have guaranteed.

Did Jesus help make the dough? Had he knelt impatiently in front of the small bulging clay oven? Or did he only taste the bread of dates and nuts later on his first pilgrimage to Jerusalem at the age of twelve?

“Wait here in the shade,” Joseph might have said. “That baker there sells dates and nuts, according to an ancient Jericho recipe.”

And he got into the crowd’s confusion to buy this tasty specialty for his two loved ones. With some fresh herb cheese, a handful of olives, and a glass of mint tea, the bread was a complete meal.

After an hour, Father takes the bread and dates out of the oven. How it smells good! Sebastião has a mouth water.

“But Lena said it’s only two days from now that she really knows!”

– Just in time for the Easter basket *! – says the father.

It is your task to make and decorate the Easter basket to be blessed in the church. Sebastião is already happy. She’ll put bread and salt, butter and pots, painted eggs and meat inside, and cover it with the red cross-stitched towel.

On the wing it holds two daffodils. Lene Mayer-Skumanz Anna und Sebastian Wien, Herder Verlag, 2003 (Translation and adaptation) * In certain countries, it is tradition, on Holy Thursday bring a basket of Easter food to the church.